These are some of our puppies that have gone to their new homes. 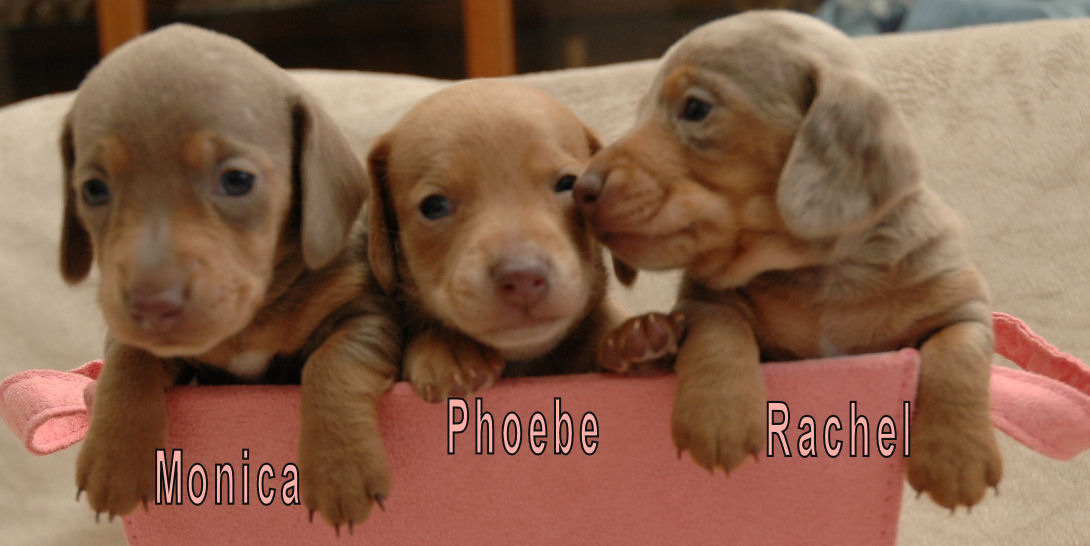 Updated pictures of Daisy in her new home. July 2011

August 31, 2011 update
Hi Barb and Don,
How are you?  Everything is going well here but just as expected, the new school year brings a busy schedule!  I wanted to write to update you on Peanut's growth and boy has he grown!  He's such a sweet boy and still so laid back except, of course, when he and Holly are wrestling.  He walks right up to the vacuum cleaner and sniffs it - I don't think we've ever had such a mellow boy.  He and Holly also enjoy hunting toads together and chasing birds out of their yard.  They are quite a pair!!  He also loves hanging out with Rusty when he comes for a visit!
I am also including some pictures of him so you can see how much he's grown! I hope things are going well for you all!  Take care and hope we hear from you soon!
-Heidi, Jeff, Katie, Emily, Holly and Peanut

Update on Vonnegut (aka Scarecrow)

Schatzie and Jaeger coming back for a visit. August, 2011 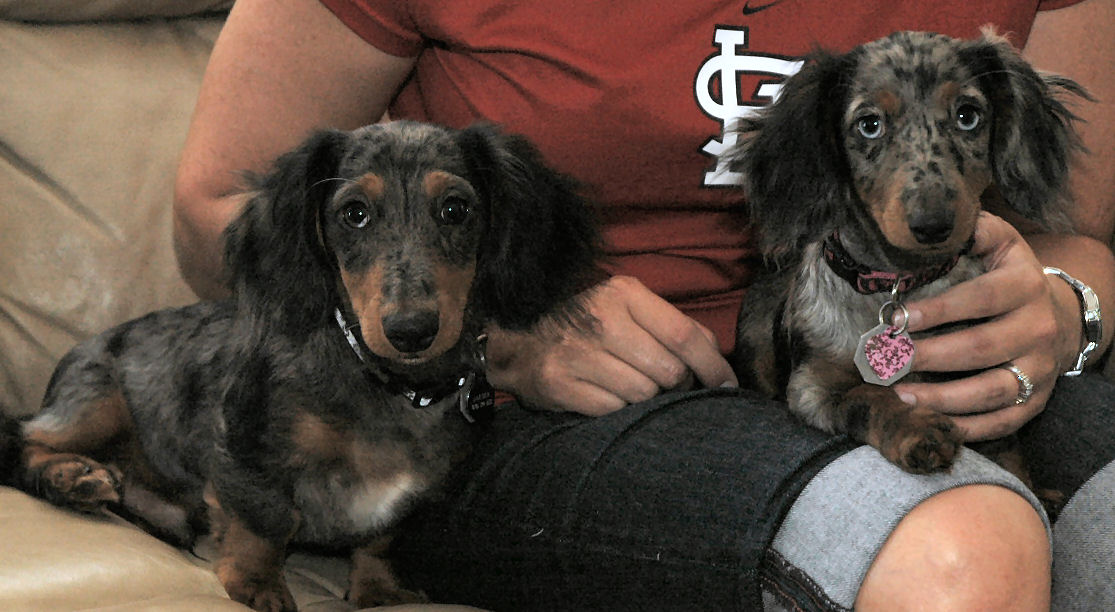 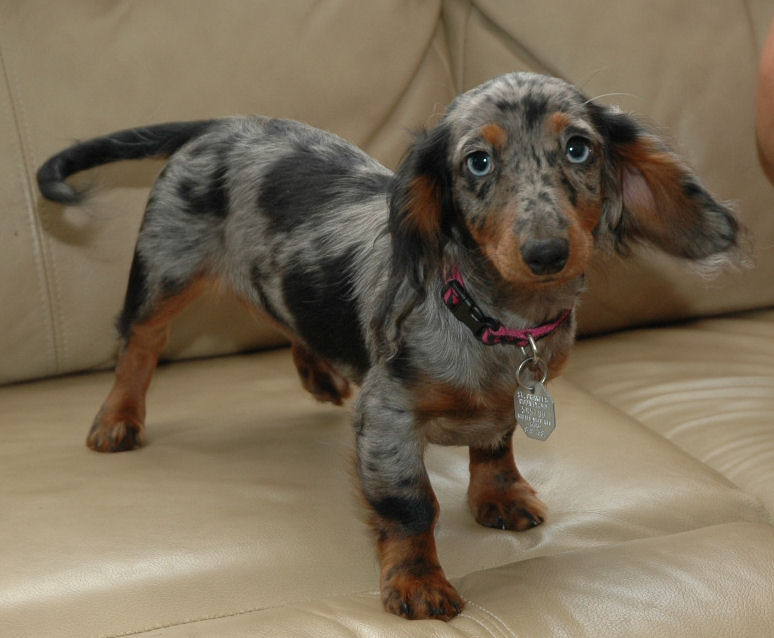 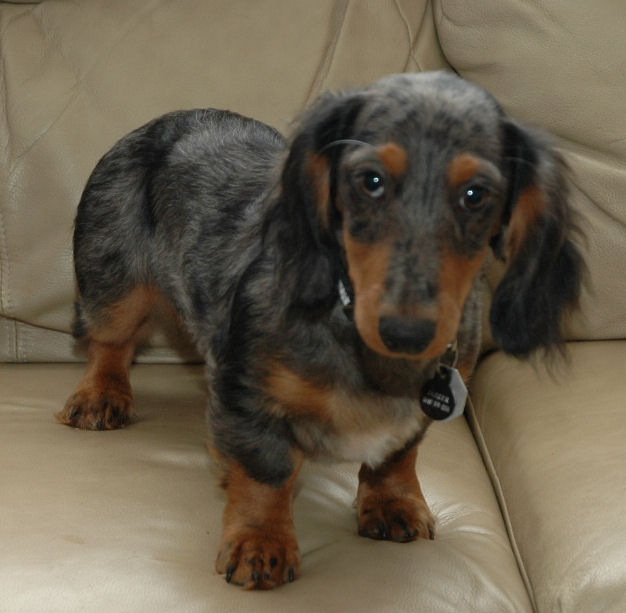 Schatzie and Jaeger in their new home. September, 2011 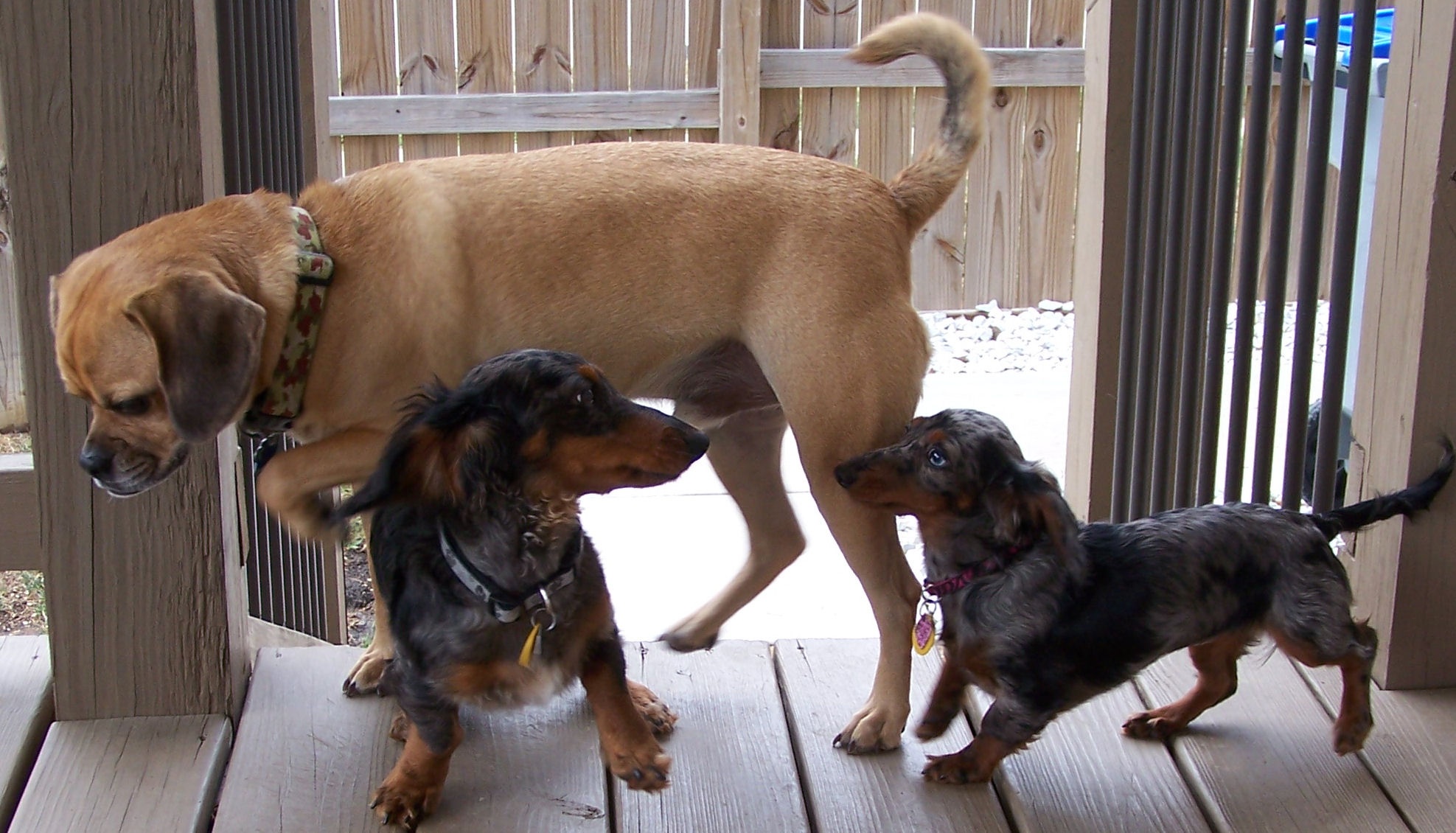 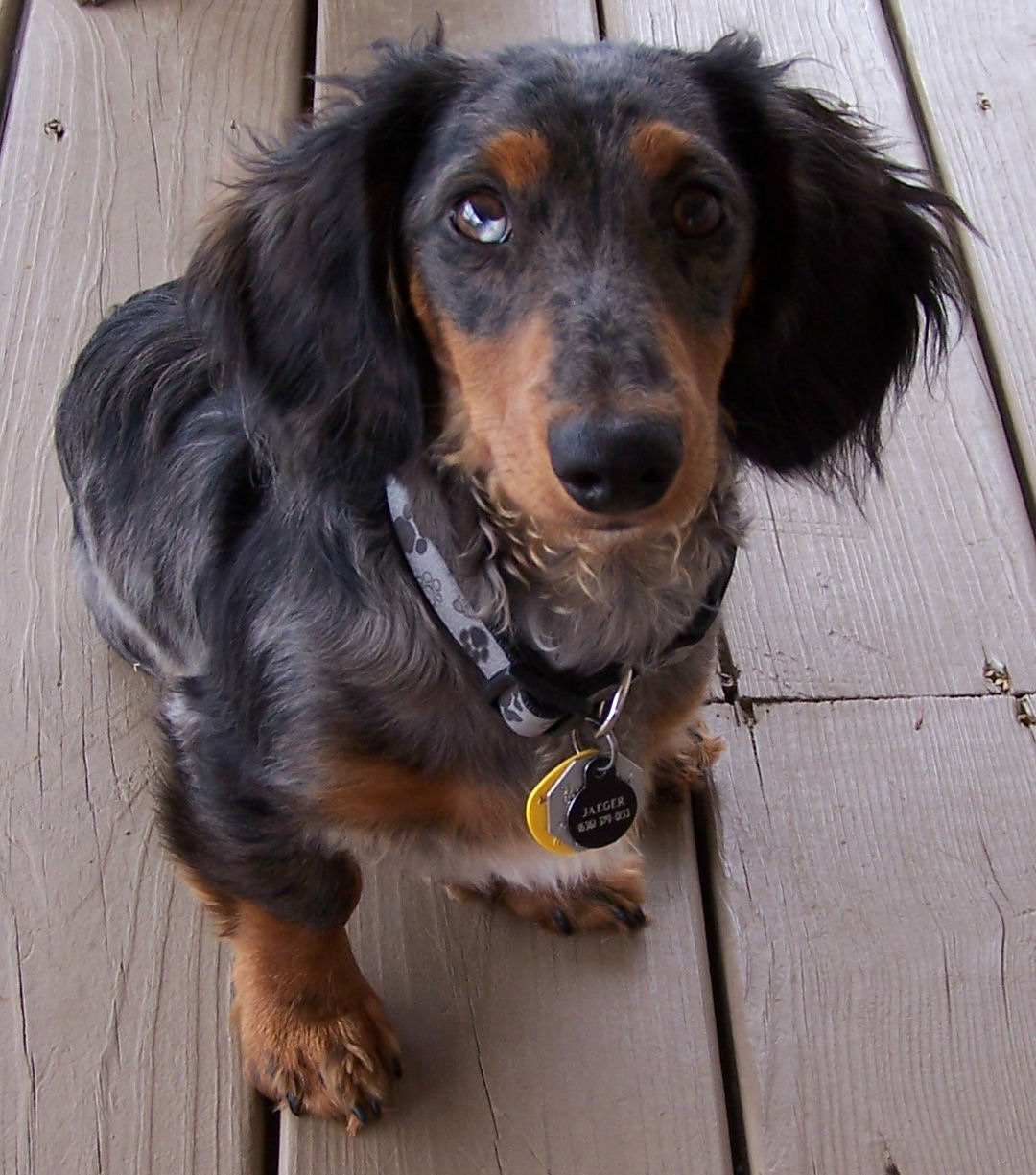 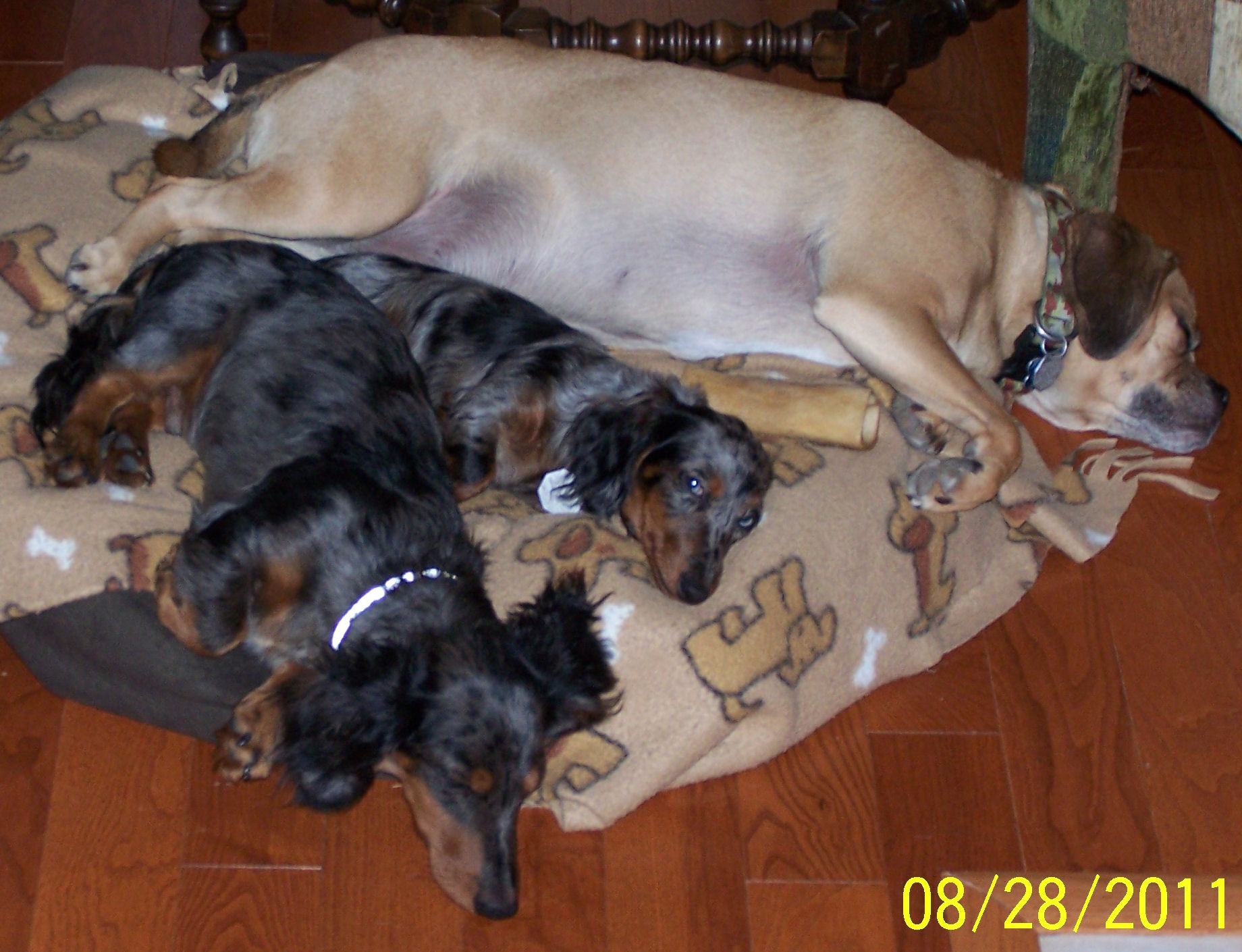 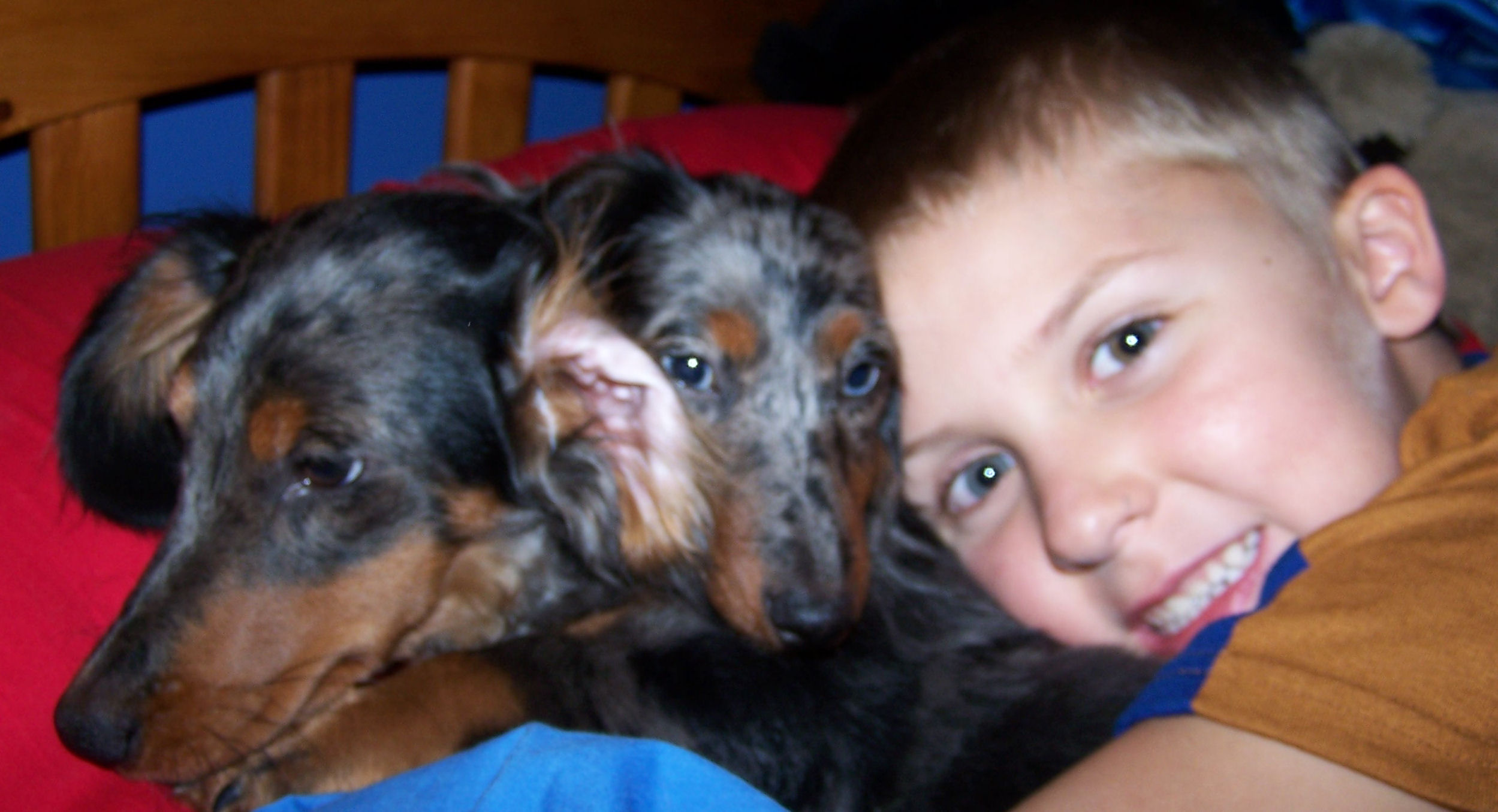 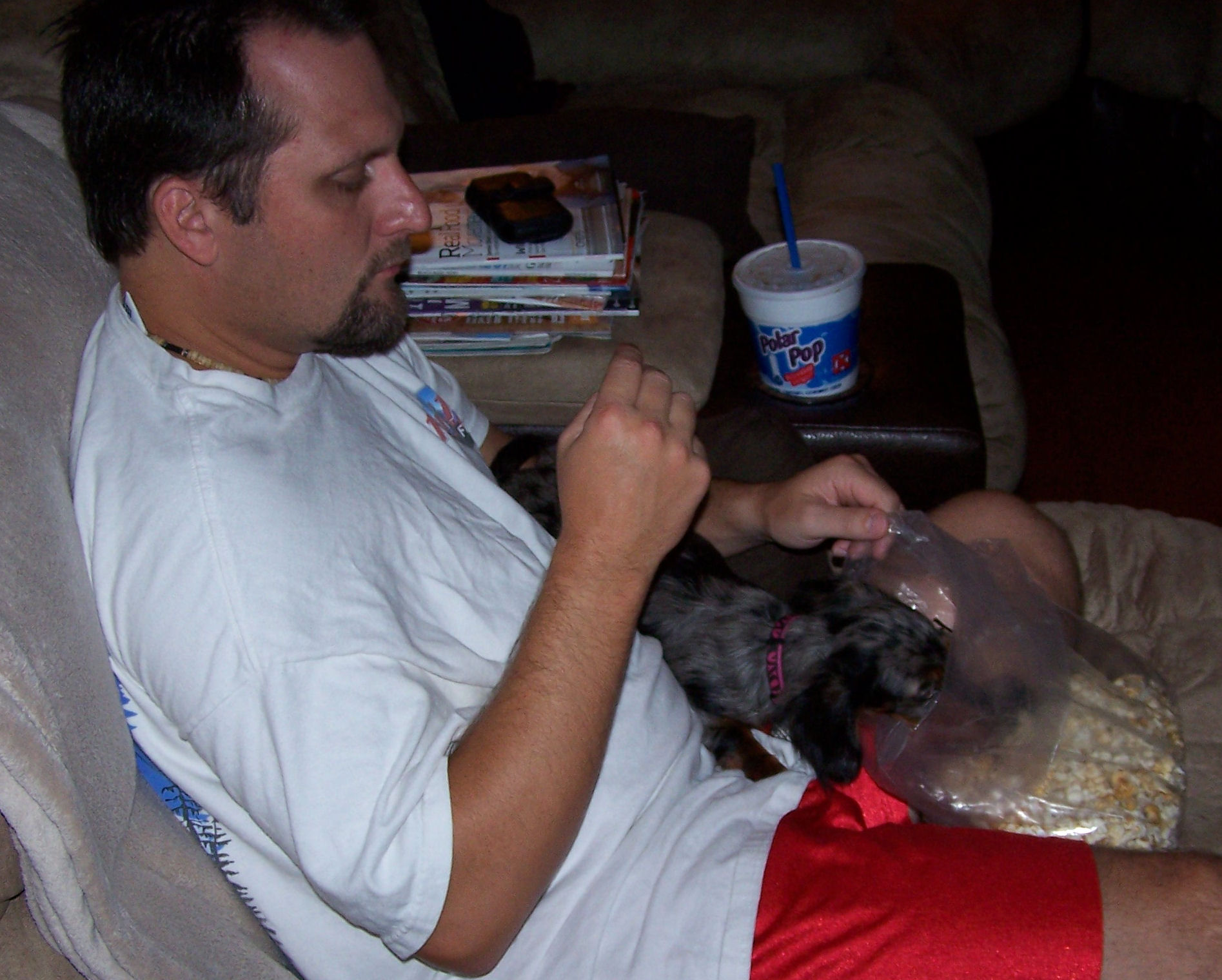 Barb, I thought I would send you a couple more pics of Schatzi in her favorite snuggle pose and Jaeger in his new "perch" in my planter. Amy

Pictures of Tom Collins in his new home. 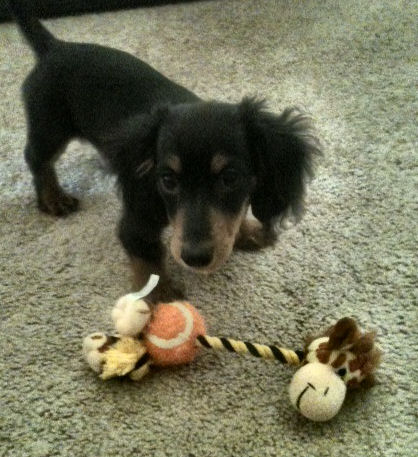 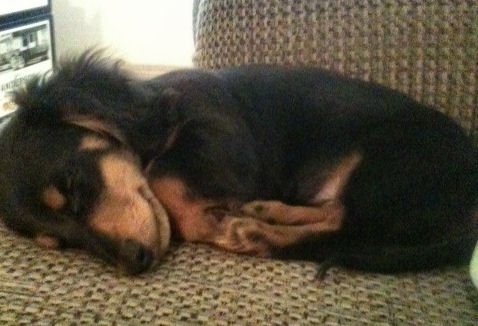 August, 2011
Good morning Don and Barb! Just thought I would update you with some pictures of Tom. He is an amazing puppy and growing up so fast! He graduated puppy school a couple of weeks ago and was one of the best students in his class. He is also getting ready for Husker football season and even has his own jersey :) Hope you enjoy the photos! Sincerely,
Abby

Lolli (aka Margarita) in her new home.

Roman (aka Topaz) in his new home.

Layney's and Snickers' litter of 7 born on May 18th. 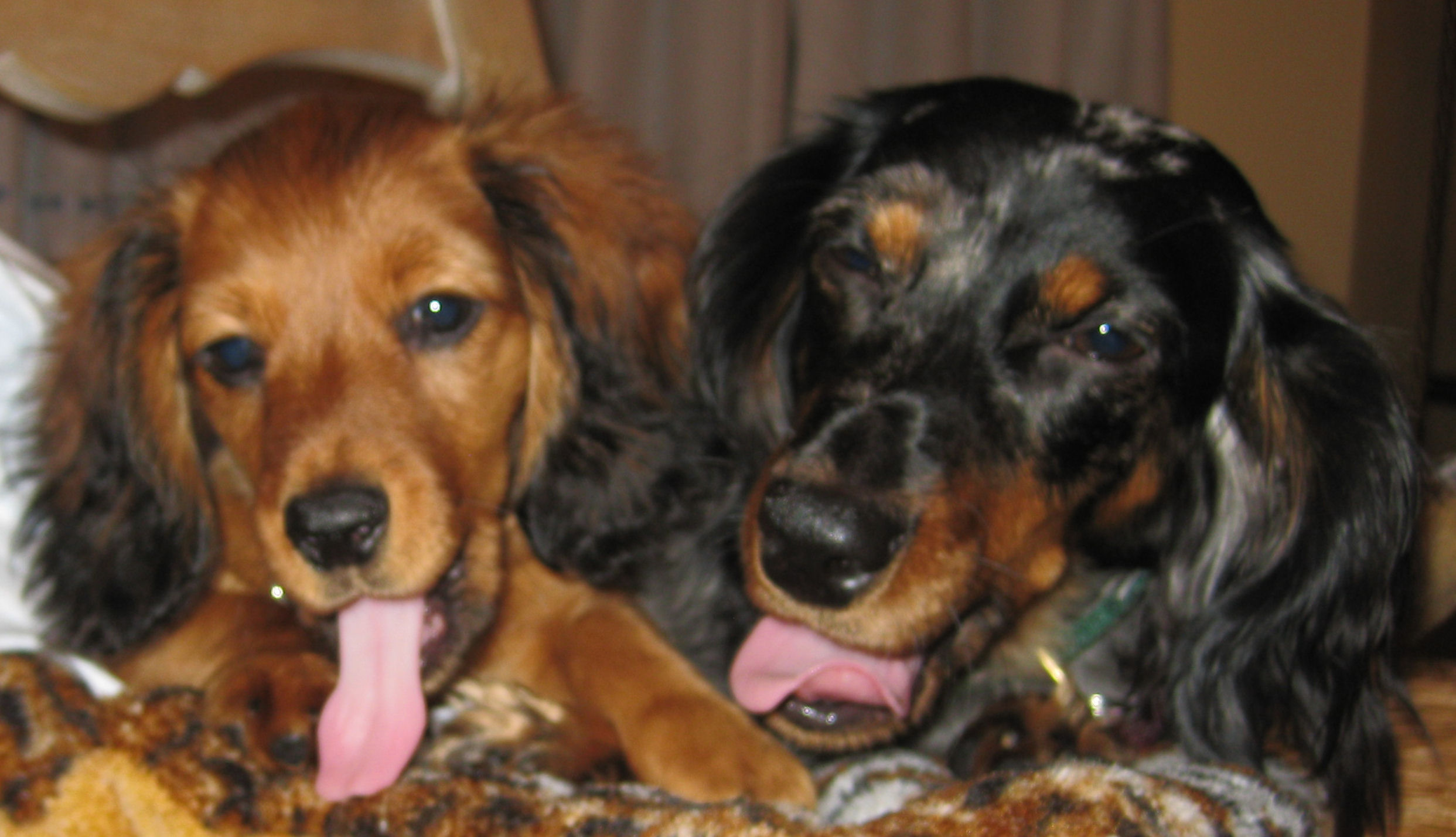 September, 2011
Hi Barb and Don,
Just wanted to drop a note to let you know that PeeWee is doing fine and growing very fast.  He completely lost his black mask and stayed so little Tom started calling him PeeWee.  It fits him to a "T".  He is a very loving dog and gives tons and tons of kisses.  He is especially playful with Nugget to the point that they run circles around the yard and family room.  They enjoy each other and PeeWee has fit right into place with the other two dogs.  We still miss and think of Harley but PeeWee has brought laughter back into the house.
Here are some pics of our boy.  He is a very loving pup and showers us with kisses. These were all taken around 16 weeks.  He weighs around 6 1/2 pounds in these pics. He likes to play in the pool with Caramel.  He wrestles with Nugget and the two play constantly.  He is Tom's buddy and has brought laughter back in our house.
Hope all is well with you.
Michelle

January 1, 2012
Now that the holidays are almost over I wanted to send a few new pics of Pee Wee.  He is  about six months, growing so fast, and is still such a loving little dog.
We will have to get together soon.

Pictures of Milo in his new home. November, 2011 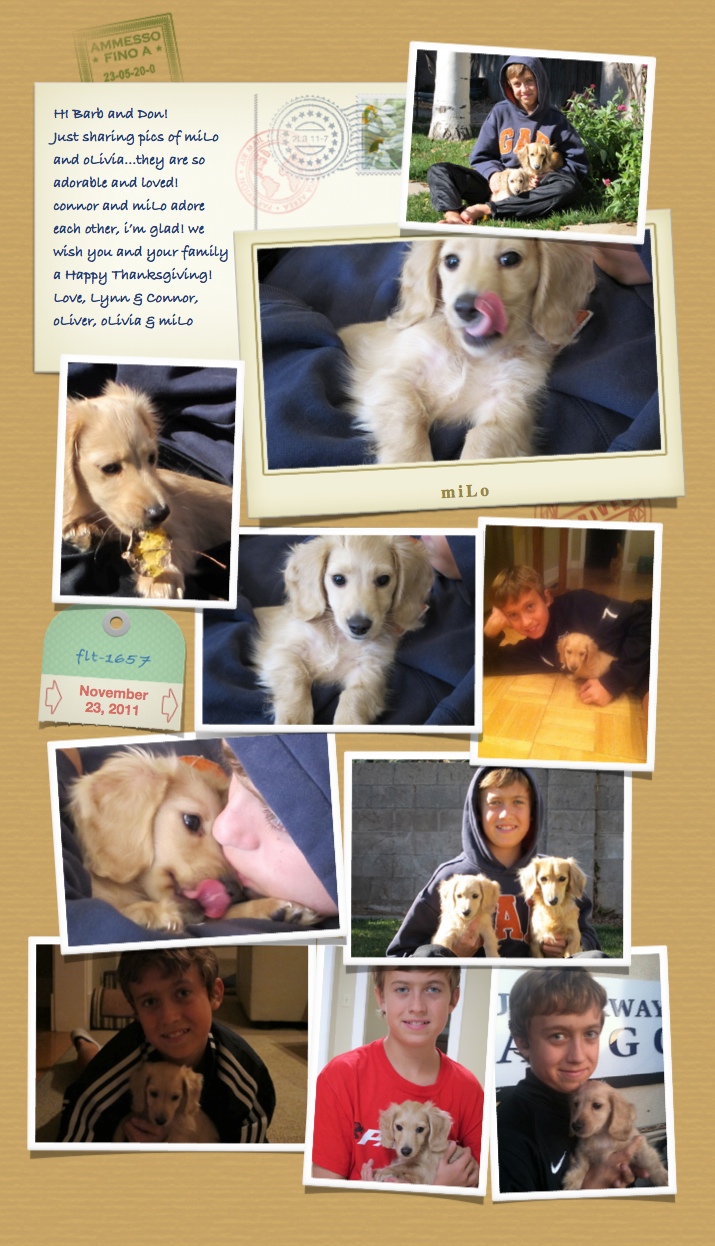 Life is Good!  we absolutely adore our little miLo!  he is mellow, playful, and loves connor! he is the icing on our cake!  thank you for being a big part of our lives!
We have an appt for shots on Friday.  miLo now weighs 3.4lbs.  he is eating the puppy royal canine but will just as well steal the big dog food.  he is always hungry and thirsty.  poops and pees a lot, so connor is busy remembering to take him out often.  accidents happen as i don't think he knows to go to the door, we just have to continue guiding him.  i come home every day at lunch and take him outside where there is sunshine and the other wieners.  connor says he is quiet and just sitting looking around when connor gets home from school.  good boy!  he is beginning to play appropriately with oLivia and she and he run around and tumble, miLo is submissive to Livia with her playful growls.  oLiver now is able to not care what miLo is doing, even if it is biting his ear! ha!  miLo sleeps with connor in his kennel, oLivia sleeps with me under the covers, and oLiver is in a crate in my bedroom.
I have taken pics this morning of oLivia and miLo and sent to you earlier.  isn't he just a beauti!  Livi too!  Let me know if i needed to send them a different way and make them bigger to see.  I absolutely LOVE the one where connor is kissing miLo and he has his tongue out.
Hope this Thanksgiving holiday is full of peace and love, enjoy!
BTW; oLivia weighs 7.3lbs...she's just a little girl but mighty!

Pictures of Lilly (aka Wednesday) in her new home. November, 2011

Pictures of Chloe (aka Morticia) in her new home. November, 2011 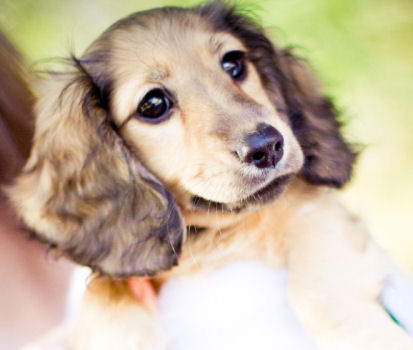 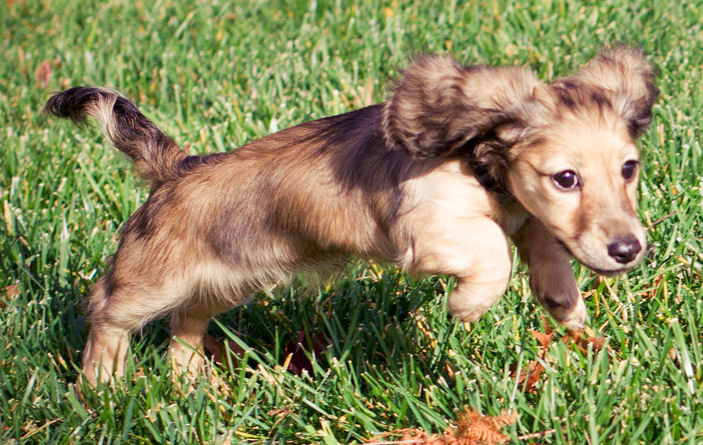 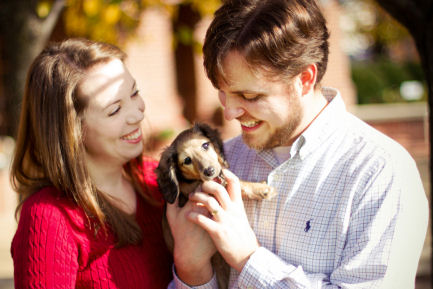 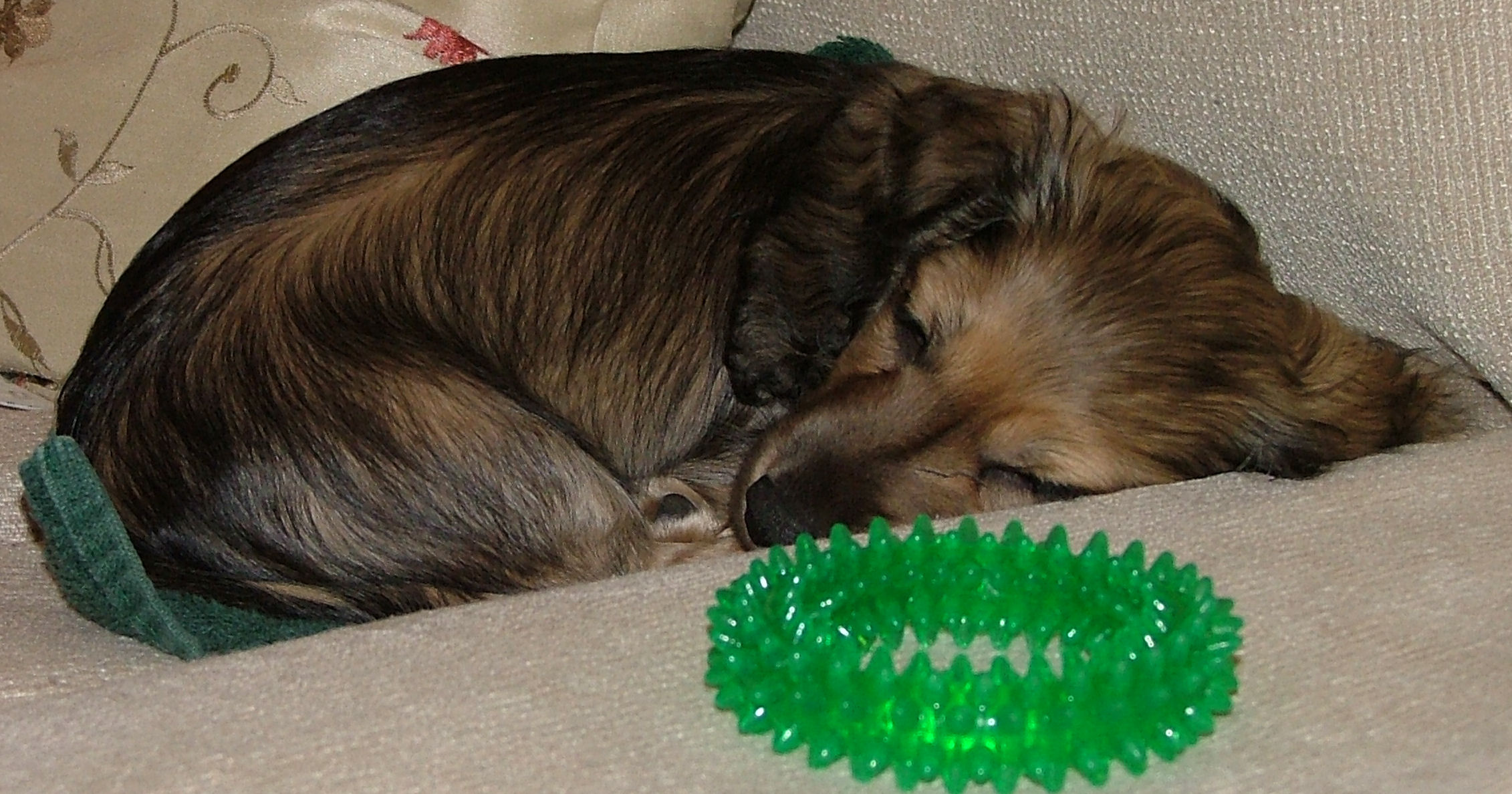 Hope you're doing well! We are loving Chloe and so thankful to have found her. Thank you for giving us such a fun, sweet little addition to our family!  Its so much fun to watch her little personality come out. She is healthy and full of energy, slowly learning potty training (if its slow its because we're slow learning on how to train her!) and just generally doing great. I've attached some pictures we had taken for a Christmas card and one we took when we first brought her home - so precious! Everywhere I take her I get so many compliments on how cute she is, and I have to agree with them all. We'll send more pics as she grows!

Happy Thanksgiving!
Mary (and Wes)
December 11, 2011
Glad you like the pictures! We love them! My friend is a photographer and she took them a few weeks ago. I need to check with her to see if you can use them. I'll let you know. I hope you can cause I think they are great! Who wouldn't want a puppy that cute?!? :-)
Mary
Hi Barb!
Just heard back from my photographer and friend, Sarah, and her answer is below. :-)
Merry Christmas!
Mary

Yes they can definitely use them as long as they mention me and put a link
to the website (www.sarahsuephotography.com).  I'm glad they like them!

Wilma had her sweet babies on September 23rd.

Lizzy's little boy born November 17th, 2011.
His name is Beau and he went home with Kelli and her family. 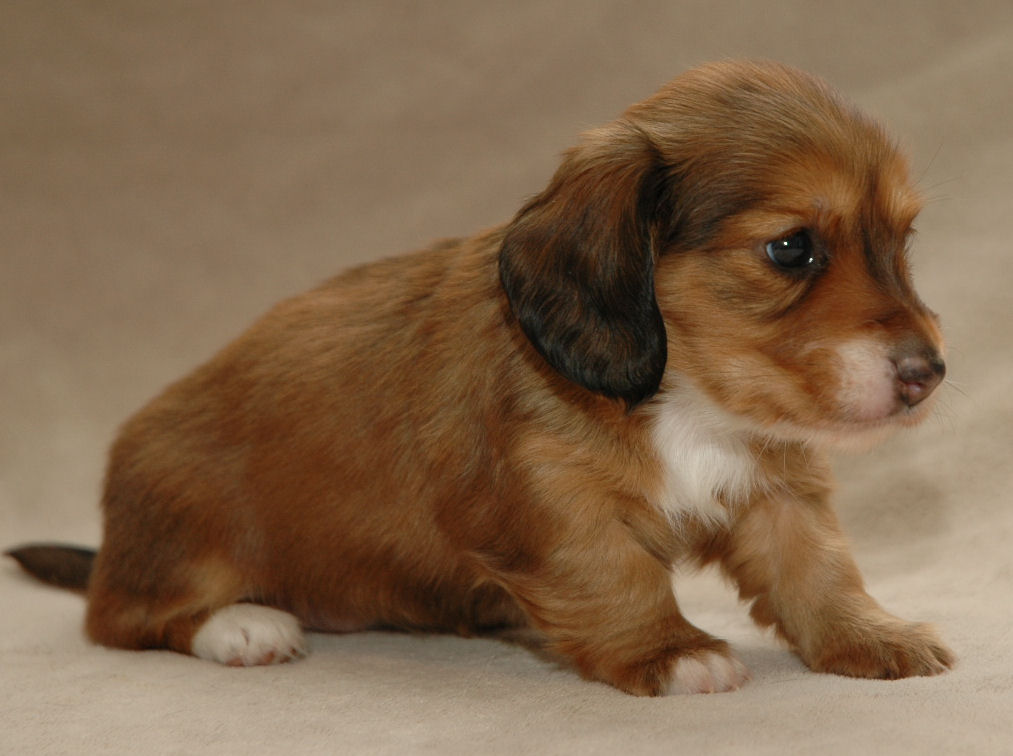 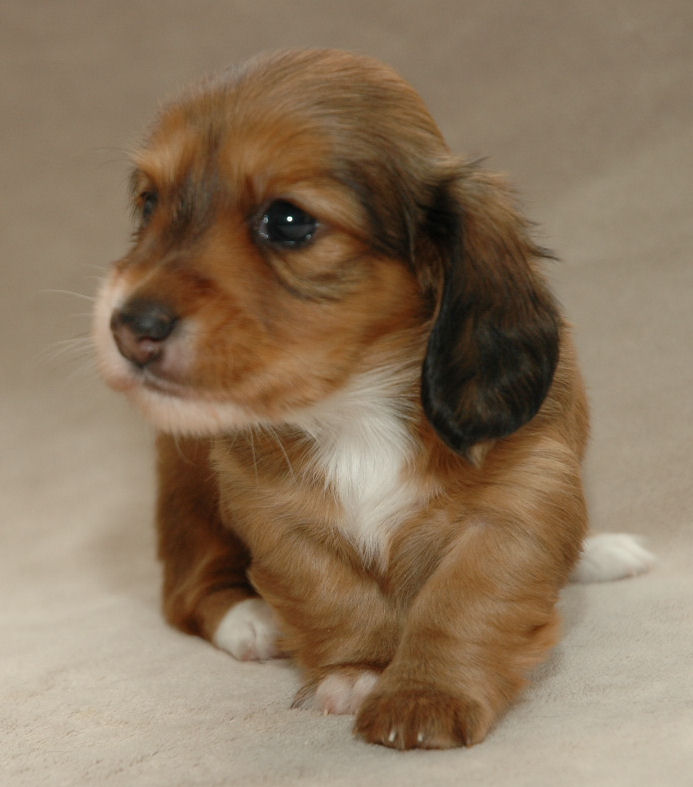 January 7, 2012
Hello, Annie is doing  SOO GREAT!! Not kidding! No accidents!!  It’s so crazy how fast she is picking up the outside potty thing. So proud of her!  I can’t thank you enough for the wonderful baby we have, she is just a joy! I sure hope you know what wonderful dogs you have/breed and sell!! Pictures will follow!! God Bless you guys, Christy

June 25, 2012
Hi Barb and Don, Wanted to send you some photos of Miss Annie she is now 7 months old and is doing just GREAT!!! Hope all is well on your
end, judging by your website you guys are super busy with the sweet puppies that you have now. Enjoy the rest of your summer take care. Christy

Woody (aka Bart) in his new home.

August, 2013 Pictures of Bennie (aka Chip) in his new home

PEPPER HAD TO HAVE SOME BABY TEETH PULLED AND THE VET TOOK THIS
PICTURE, SHE WILL BE 6 MONTHS OLD DEC. 30TH AND WHAT A JOY TO ME.
MERRY CHRISTMAS FROM CHAR & PEPPER

Pictures of LuLu in her new home.

Ellie (aka Santa Maria) in her new home.


Lucy (aka Pinta) in her new home.

Bella (aka Nina) in her new home.

Gracie's and Rebel's litter born on September 20, 2012
Gracie's and Rebel's pups were such a beautiful and popular litter, that we will repeat
this breeding in 2013.  If you would like to be put on our notify for a pup similar to one of
the pups above, please email me your name, telephone number and your preference
for gender, coat type, color & pattern. Our email address is dfortmeyer@charter.net

Pictures of Izzy (aka Stormy) in her new home.

Ace (aka Smokey) and Mia (aka Luna) in their new home.

Molly (aka Celeste) in her new home.

Mia (aka Luna) and Ace (aka Smokey) in their new home.

Pictures of Leia (aka Aspen) in her new home February, 2013

Pictures of Sassy (aka Aurora) in her new home April, 2013

We do not knowingly sell to pet stores, puppy mills or puppy brokers.
We Reserve The Right To Refuse Service To Anyone.